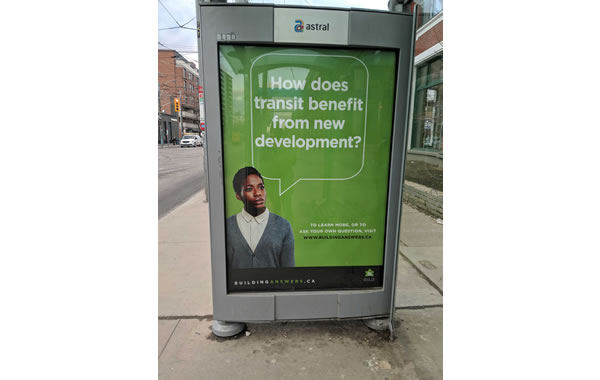 BILD launched its Building Answers campaign in April to answer the top questions that GTA residents have about housing and development in a public, open and factual manner. The campaign ran from April 2 to May 10 as GTA residents were encouraged to visit buildinganswers.ca to see responses to the initial top 24 questions as well as ask the industry their own questions.

With 115,000 new people calling the GTA their home every year and the population expected to grow by 40 per cent to 9.7 million by 2041, development and housing construction is highly visible throughout the region. It’s only natural, then, for residents to have questions and want to understand the changes they are seeing in and around their communities. As the industry that builds the places where people live, work and play, we are committed to facilitating an informed discussion.

The top 24 questions were sourced from residents who participated in a public opinion poll conducted by Ipsos. The first question was open-ended: “The building and land-development industry comprises homebuilding companies, land development companies and professional renovators. If you could ask the CEO of a company that works in this industry any question, what would it be?”

The second, closed-ended question posed a list of 18 possible questions to residents, and asked them to choose up to five that they were most interested in hearing the answer to. The results of the research were then provided by Ipsos to BILD in the form of tabulated coded results.

BILD receives inquiries on a regular basis from members of the public about housing and development in their communities. The Building Answers campaign allowed the industry to engage as many people and answer as many questions as possible. When you allow people to be part of the discussion and share information, you allow them to be part of the solution.

The six-week awareness campaign began with an intimate and interactive lunch with leaders of the building industry and GTA media. The conversation was open and honest, with the media asking tough questions, and developers answering their questions in a transparent and factual manner.

By the end of the campaign in mid-May, BILD received hundreds of questions, with housing affordability, increased development and density as the most pressing asked about topics.

Frankly, I was overwhelmed by the questions from the public, and I’m humbled by the time and effort that individuals dedicated to our Building Answers campaign. Residents of the GTA are passionate about development in their communities, and I am proud that the industry stepped up to answer their questions.

While the campaign is technically over, strengthening the connections we’ve made – and the discussions we’ve begun – will go a long way to ensuring ongoing communications and understanding between the industry and the public.