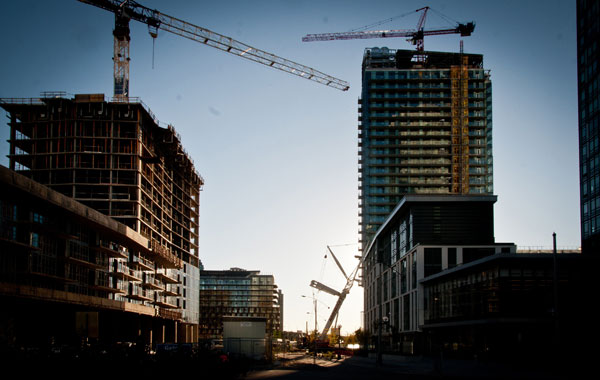 Did you know that Canada is the only country in the G7 without a national Building Information Modelling (BIM) mandate?

Why is this important? Because BIM is a process built around the digital 3D representation of a building and used by architects, engineers and construction (AEC) professionals (and possibly regulators) to efficiently plan, design, construct and manage buildings and infrastructure. It has the capability of allowing multi-disciplinary professionals to work collaboratively on the same platform. It’s used in many countries across the globe outside of the G7 as well, including Singapore, Finland and Denmark (see Figure 1; the size of the circle represents each country’s proportional population). It’s time for Canada, led by Ontario, to get with the times if we’re going to be competitive on the global stage – at the very least, to help streamline approvals and building timelines so that new-home buyers can get into their new condos and homes more quickly.

Sure, Canada’s construction industry has been widely criticized for its slow adoption of new technologies over the last two decades, but there has been a significant shift towards a journey into digitalization by our industry.

A big part of that shift has involved the University of Toronto’s Building Innovation Research Centre, which partnered with RESCON and the Toronto BIM Community (tBIMc) in 2017 in conducting a detailed survey of BIM implementation among Canadian AECs and facility management industries. Its success attracted interest from national BIM organizations CANBIM and BuildingSMART Canada. One key question in the 2018 survey asked respondents to agree or disagree with the statement that adopting BIM can: It was refreshing to see respondents generally agree with the perceived benefits of BIM.

(Complete analysis of the first two annual BIM surveys can be found at buildingtall.utoronto.ca)

“I can’t emphasize enough how important it is to align the research priorities of BIRC with the research gaps in Canada’s construction and design industry,” says BIRC’s Director, Prof. Brenda McCabe of the civil and mineral engineering department at the University of Toronto. “These surveys are envisioned as an effective and transparent communication channel for the industry to inform not only the research priorities for academia, but also the technological directions of the municipal and provincial government agencies.”

All of this is to say that BIRC has launched its third annual BIM survey. Click here and share with your friends in the AEC community (or here for the French survey). BIRC is aiming for 1,000 participants from across the country this year.

We’ll share the results of the national BIM survey in the New Year.

THE INDUSTRY LEADER: Housing policies must focus on supply